On-Demand Webinar: Assessing Your Communications Networks and Leveraging the Results to Make Improvements

The strengths and weaknesses of your current public safety communications networks can be difficult to quantify and communicate to agency leaders and other officials. To support this effort, Mission Critical Partners launched the Model for Advancing Public SafetySM, or MAPSSM, an assessment tool designed to provide a visual representation of a network’s strengths and weaknesses. How can MAPS help your agency assess, quantify and communicate the current state of your communications network and how can the results be used to encourage decision-makers to make improvements?

Are you ready for the delivery of your state's deployment plan of FirstNet?

Listen to this virtual webinar to hear experts from MCP provide insights and guidance regardless of your status in the preparation for FirstNet. This is a can't miss session that will help you build your organization's FirstNet strategy. This session is designed for public safety leaders and FirstNet state single points of contacts.

In this webinar we will discuss:

Infographic: Benefits of Working With a Public Safety Consulting Firm

From migrating to a new facility, acquiring forward-looking, mission-critical technology to integrating data originating from modern, digital-based devices, Mission Critical Partners is helping public safety organizations feel peace of mind and realize greater success during complex initiatives. Learn more about the benefits of working with a consultant in our infographic below. 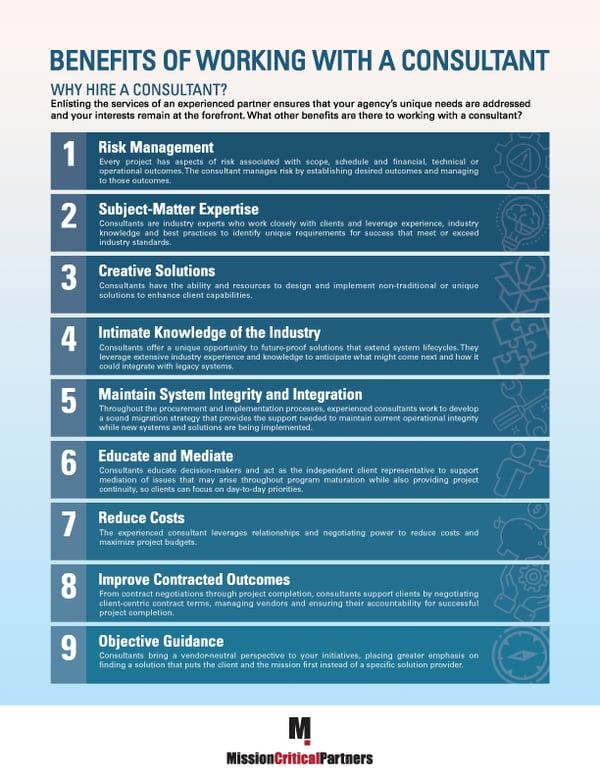 The Evolution of the Emergency Communications Ecosystem

The public safety sector and emergency communications has reached an inflection point. Technology has evolved dramatically, and the needs and expectations of the public served by PSAPs have evolved as well. Data has overtaken voice in terms of importance. As a result, PSAPs need systems that are capable of leveraging the enormous amount of data is that already available, yet inaccessible today. Legacy call-handling equipment equipment that has existed for the last 50 years needs to be replaced with new equipment capable of processing calls and data originating from digital, Internet-Protocol (IP)-based devices.

There are several significant, disruptive technology and operations trends that Mission Critical Partners feels will set the stage for the future of public safety over the next three to five years. Public safety agencies must understand these trends, begin preparing for them now, and understand how to adjust their operations in order to adapt. They are trends that cannot afford to ignored.

This whitepaper examines push-to-talk over celluar and mission-critical push-to-talk technology, explaining why they may be a better choice than LMR in some cases, and how they provide significantly more flexibility regarding application, device and network choices. The biggest benefit of MCPTT service is that it replicates the PTT functionality of traditional LMR systems on devices that are smaller, lighter and much less expensive than portable radios traditionally carried by first responders. Also examined are important factors to consider when deciding whether to implement the technology.

Fifth-generation (5G) wireless communications has the ability to accommodate the fast-growing demand for bandwidth required for the delivery of multimedia content, including video, images and social media, to PSAPs. During this webinar, MCP subject-matter experts discusses how 5G can help improve emergency response and what it means for communities and public safety organizations alike.

Discussion topics during this session include:

Infographic: The Possibilities of a Converged FirstNet and NG911 Public Safety System

See the possibilities of a converged FirstNet and NG911 public safety system with this infographic from Mission Critical Partners.

Over the next 5-10 years, FirstNet will deploy the Nationwide Public Safety Broadband Network (NPSBN). As a parallel process, emergency services IP networks will be built to provide interconnectivity between PSAPs to allow for deployment and utilization of Next Generation 911 (NG911) technologies by PSAPs across the nation. In this session, MCP examines the major issues involved with the transition to this new platform for public safety communications and provide a glimpse into what the emergency communications environment could look like in the next 10-20 years.

What's the Future of Land Mobile Radio in a FirstNet World?

Many public safety communications officials are wondering if they should replace their land mobile radio (LMR) system now that FirstNet has become a reality. This whitepaper makes the case for why agencies shouldn’t abandon their plans to replace their LMR system.

Now that the public safety sector is contemplating the implementation of an IP-based network known as the Nationwide Public Safety Broadband Network (NPSBN). Although this network was intended from the beginning to ramp up the public safety’s data capabilities in the field, a question was raised whether the NPSBN someday will replace the land mobile radio (LMR) systems that traditionally have provided mission-critical voice service.

Download this whitepaper to read more about if, and why, agencies should not abandon an LMR replacement project in the foreseeable future.

On-Demand Webinar: Radio Interoperability and the Role of FirstNet

This on-demand webinar explores the concept of radio interoperability, which is an essential and fundamental component of effective first responder communications. Topics of discussion include interoperability tools and methods, technologies available on the market today, as well as what agencies should should consider when improving interoperability. Also discussed is how interoperability doesn't stop with technology, and the role that operations, training and planning plays in achieving true interoperability.

In this webinar we discuss: