The 9/11 attacks also represent a watershed moment for our nation and the emergency responders who protect it. The Department of Homeland Security and the Transportation Security Administration were formed as a direct result of the terrorist attacks. Soon after, DHS created SAFECOM, which was charged with improving public safety interoperability, particularly communications. Three years later, DHS created the Office of Interoperability and Compatibility (OIC) to strengthen such efforts to improve emergency response preparedness at the local, state, tribal, and federal levels.

That was just the beginning. Much has happened since 9/11 to move emergency response forward, with much of the progress driven by communications enhancements.

The following are some of the most significant developments. 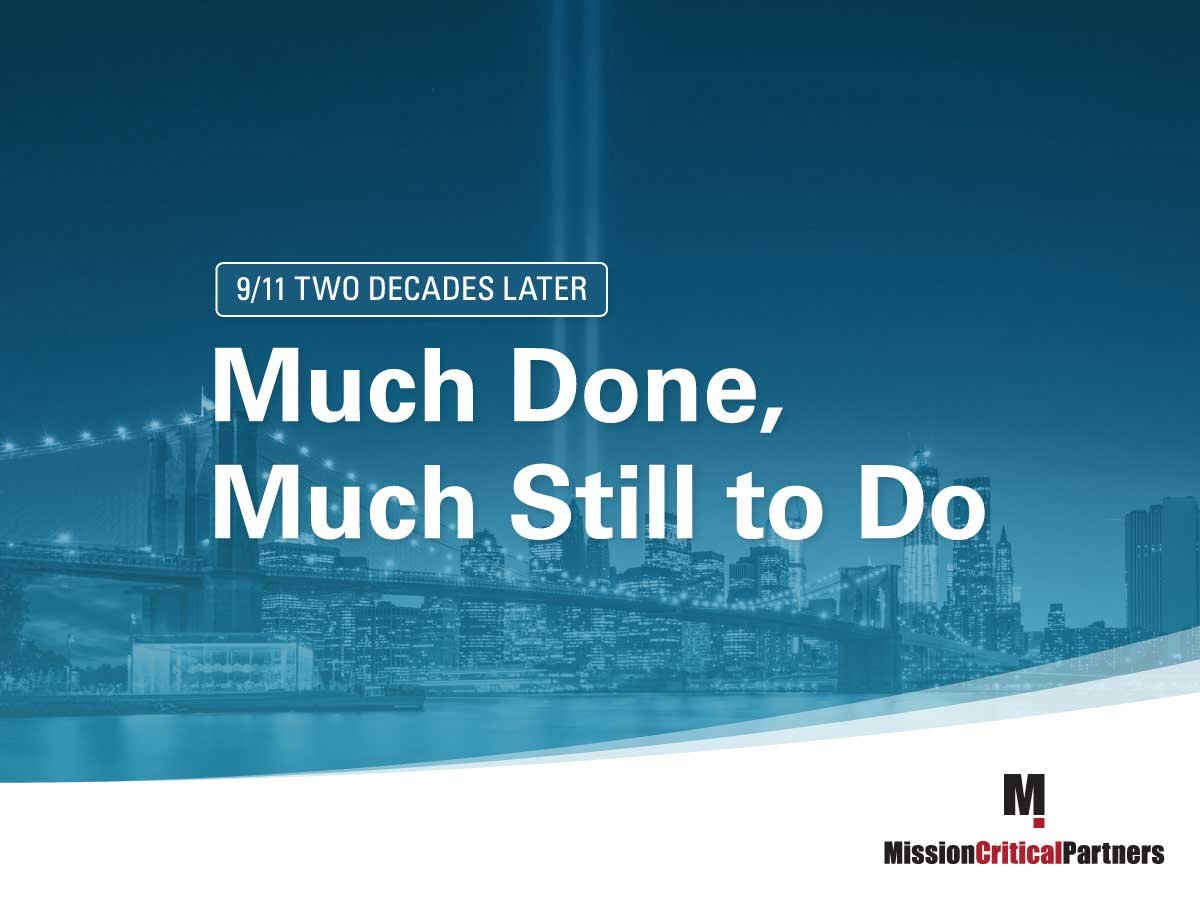 Project 25 — The first P25 radios appeared in the marketplace roughly a decade after the terrorist attacks. The effort to develop a suite of open standards for digital conventional and trunked land mobile radio (LMR) systems was led by the Association of Public-Safety Communications Officials (APCO) and the Telecommunications Industry Association (TIA). Ultimately eight open interfaces between the various components of an LMR were specified, with the greatest benefits being enhanced bandwidth and interoperability.

First Responder Network Authority (FirstNet) — The terrorist attacks brought the lack of interoperable communications between emergency response agencies into sharp focus. In particular, the lack of interoperable communications between the New York City police and fire departments (NYPD, FDNY) was cited as a factor in the firefighter losses. One example: an observer in an NYPD helicopter reportedly advised that the tower girders were glowing red-hot and were in imminent danger of collapse, but the FDNY never received the message.

The interoperability challenges experienced on 9/11—well detailed in the 9/11 Commission Report — arguably were the catalyst for the creation of the FirstNet, which was authorized by Congress in the Middle Class Tax Relief and Job Creation Act of 2012. Congress also authorized 10 MHz of broadband spectrum and $7 billion in seed money for the implementation of the national public-safety broadband network (NPSBN).

Today FirstNet reports that more than 15,000 emergency response agencies have subscribed to the NPSBN, accounting for more than 2 million connections. Further, the network covers nearly 3 million square miles and 99 percent of the U.S. population, according to FirstNet.

As we know, FirstNet is not the only broadband network available to public safety agencies. Other alternatives exist; however, the creation of FirstNet showed the importance of having reliable broadband service provider(s) to improve the services provided by the public safety community, as well as the emergency responders who provide them.

Next Generation 911 — The terrorist attacks also placed a spotlight on the antiquated and inefficient nature of the legacy 911 system. In 2006, New York City released partial audio recordings of 130 emergency calls placed in the immediate aftermath. A subsequent New York Times article reported numerous failings. In one instance, a caller was transferred repeatedly between police and fire telecommunicators for 11 minutes, and in the process had to repeat information he previously had provided. A contributing factor was that the NYPD and FDNY reportedly operated separate computer-aided dispatch (CAD) systems that had no ability to share data.

While the birth of NG911 arguably occurred in 2001 when the National Emergency Number Association (NENA) released its “future path” plan — the concept first was identified the year before — 9/11 clearly provided the catalyst to accelerate the effort. NG911 development began in earnest in 2003, which led to NENA issuing the first functional and interface standards for such networks three years later, commonly known as the i3 (third iteration) standards. This year, NENA released the third version of i3 and sent it to the American National Standards Institute (ANSI) for accreditation, which is expected.

So, how far have we come in 20 years? In the last few years, several states have made some amazing strides regarding their NG911 implementations. For example, we know of states that are implementing the second or even third generation of their emergency services Internet Protocol network (ESInet), which enables emergency calls to be delivered to an NG911-compliant emergency communications center (ECC). In addition, several other states have started the procurement process or have begun to implement an ESInet.

Arguably, more progress has been made in the last five years than in the previous 15. But there’s a lot more work to be done, as NG911 implementations are nowhere near as ubiquitous as FirstNet’s NPSBN. The biggest obstacle is funding, as NG911 hasn’t been as large of a funding priority at the federal level as the NPSBN has been.

However, there is renewed hope that this will change. Just this week the House Energy and Commerce Committee released its recommendations regarding revisions to the Budget Reconciliation Act; among them is authorization by Congress of $10 billion via grant awards to advance NG911 in the U.S. Grant money would be available until September 30, 2026, and can be used for NG911 implementations, operation, maintenance, and training. An important provision is that any entity will be ineligible for a grant award if it diverts fees collected to support 911 service to any purpose. The recommendations also include $80 million for creation of a NG911 cybersecurity center, which will coordinate information sharing regarding cybersecurity threats with state, regional, and local entities, and $20 million for creation of a 16-member NG911 advisory board. Again, this money is slated to be available until September 30, 2026.

Data Integration — This is a relatively new concept in the public-safety ecosystem. Data integration has three essential elements: gathering, analyzing, and sharing. When data integration is done well, it is transformative. On a high level, more and better data leads to enhanced decision-making and improved outcomes, regardless of one’s business.

According to the New York Times article, critical information gaps developed in the aftermath of the terrorist attacks. For instance, only two of the 130 emergency callers were told to evacuate the towers, even though such an order had been issued — in fact, many were told to do exactly the opposite, a tactic known as “defend in place,” which is standard procedure in high-rise fires. A culprit was that incident commanders had no way to share information with the legacy 911 system.

Intuitively, sharing data seamlessly with every authorized recipient when and where it is needed is a very good idea. Technology has emerged to make this easier, in the form of data exchanges that enable bidirectional data flow between endpoints, and machine-learning and artificial-intelligence technologies that analyze raw data to give it context, which in turn makes it actionable. The result is better decision-making, and better emergency response outcomes.

However, while progress is being made in this regard, information gaps still occur far too often, largely because many if not most organizations and their communications systems remain siloed. A corollary factor is that such organizations are hyper-focused on their missions and thus tend to think inwardly.

A shift to more holistic thinking that enables public-safety organizations to consider how other organizations across the ecosystem can use the information that their systems generate is sorely needed. Only then will data integration meet its full potential.

So, much has been done to improve emergency response communications, but there is much still to do. But that’s always been the case, hasn’t it? A century ago, police officers would have to run to a stationary call box to call in an incident or request backup — or worse, they would have to yell or pound on the pavement, a railing, or a sewer grate with their baton, which was hardly ideal. However, in 1933, the Bayonne, N.J., police department became the first in the U.S. to introduce two-way mobile radio communications between headquarters and cruisers in the field, which was a tremendous leap forward at the time. Now look what they have at their disposal.

The moral of this story is that evolution not only is inevitable, it also is imperative. Because we are on the cusp of fall, I will close with a football metaphor — let’s work together to keep moving the ball down the field. It is vitally important to do so, not only to ensure that emergency responders have what they need to keep us safe during crises, but also because it would be an outstanding way to honor them and their service. Please reach out.

Darrin Reilly is MCP’s president and CEO. He can be emailed at DarrinReilly@MissionCriticalPartners.com.