The Consumer Technology Association’s International Consumer Electronics Show (CES) wrapped up earlier this month in Las Vegas, and 911 and public safety communications should be paying attention now more than ever before.

If you’re not familiar with CES, it showcases new technologies and innovations on the horizon, some of which have the potential to change lives. This year, for the first time ever, CES featured a new Smart Cities Marketplace and conference track where they explored what’s next for smart cities. Topics included smart transportation and the smart grid, public safety and healthcare, data analytics and security, and of course, artificial intelligence.

Some of the most intriguing products included an app released by AT&T that monitors infrastructure—such as bridges, roadways and railways—to see if they’re safe and then triggers notifications if one is sensed. Other apps that offer a direct connection to first responders via the push of a button during a dangerous situation are rising in popularity were also introduced.

These apps represent only the beginning of what’s to come with smart cities. (Read more about FirstNet & AT&T's IoT and smart city plans.) Today, there are about 100 sensors in place for every person on the planet, a mind-numbing figure when one considers there are more than 6 billion people on Earth.

There sensors are found everywhere, ranging from real-time traffic data generated by sensors in roadways, or atmospheric sensors implemented in cameras that monitor pedestrian movement, traffic, air quality, and noise, or in street lighting. What’s most intriguing about them is that they can deliver the data they collect to city officials. Last year, San Diego announced that they will deploy 3,200 intelligent sensor nodes that will help to enhance public safety and environmental awareness and help first responders during an emergency, among other benefits.

why should public safety care?

Because data inputs, such as the ones aforementioned, have the power to raise situational awareness in the public safety answering points (PSAPs) to levels that were once unimaginable. It also means that, one day soon, data, instead of voice, likely will drive how our 911 centers operate, and we could witness a point in time where 911 centers shift from being predominantly reactive during emergencies to being proactive data hubs that have increasing power to help prevent emergencies from taking place.

Much work still needs to be done by the nation’s 911 centers if they want to harness the full potential of such technology, but progress is being made. Given the fact that both the nationwide public safety broadband network (NPSBN) and Next Generation 911 (NG911) are both Internet Protocol (IP)-based and broadband-enabled, it will be possible for the first time ever to leverage enormous amounts of new data, particularly if these networks are converged.

So, what other developments will be required for 911 to evolve to this level?

Interfaces will need to be created that allow the plethora of data streams to flow into the 911 center and then to enable telecommunicators to interact with them. These interfaces are crucial, as they provide the translation necessary for disparate systems to communicate.

Some of these interfaces will reside within the PSAP, and others will be cloud-based. Regardless of where they live, interoperability will be key─these interfaces will need to be based on open, non-proprietary standards so that the systems involved can communicate with each other.

The amount of data that could flow into the 911 center will be enormous, and no one human is capable of simultaneously juggling these data streams, much less making sense of them. Social media could contribute to that complexity (learn more about this in an earlier post, “Social Media and Emergency Response: The Challenge with Leveraging Social Media Data.”

Thought must be given to how public safety will store and secure the data. Will it be onsite or in the cloud? Who owns the data? Who can leverage it and how?

PSAPs already are facing major cyber security threats—in 2017 alone there were hundreds of documented incidents. Anything that flows into the PSAP must be secure, and once it arrives at the PSAP, it must be protected.

There is no doubt that the smart-cities movement creates tremendous opportunity for public safety communications, but we have a long way to go to get there. And we can’t move slowly. The smart-cities movement is on pace to move just as quickly, if not faster, than the pace at which mobile communications transformed the 911 center not very long ago.

We explore these impacts and others in detail in our latest whitepaper, “The Technical Evolution of the PSAP in an NG911 and FirstNet Environment.” 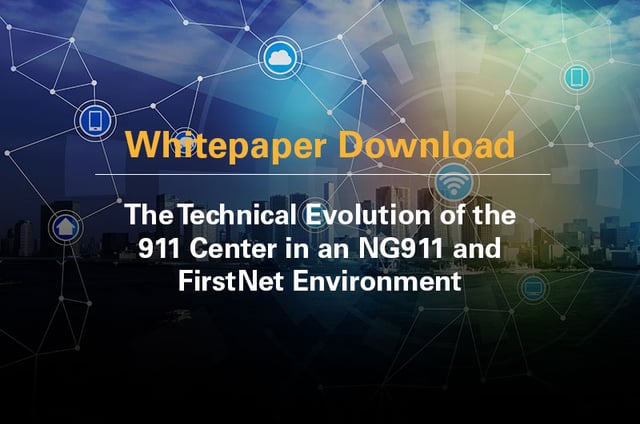