The Other Side of Early Adoption in the Public Safety Community

Being an early adopter in the public safety/emergency response community is a wonderful thing. It is exhilarating to be on the leading edge of technology innovation, especially when one is steeped in the belief that such innovation will save many more lives—which happens to be the public safety communications community’s business.

However, as with most things in life, there is a flip side to this coin, which is that it not always easy to be an early adopter. To pull it off one needs not only considerable vision and drive, but also an equal measure of fortitude.

Recently I moderated a panel discussion regarding a pilot project conducted earlier this year that explored how social media data could be leveraged to enhance emergency response. (If you missed this free webinar, it is archived here. I urge you to take the time to view it—a lot of great information was presented on a very interesting project.)

One of the panelists was Jim Lake, director of Charleston County (S.C.) Consolidated 911 Center. The pilot project was conducted at his center. Jim is universally acknowledged as one of the public safety/emergency response community’s foremost early adopters. In November, Jim presented at the second annual Early Adopter Summit, an invitation-only conference convened by Christy Williams, 911 director for the North Central Texas Council of Governments (NCTCOG). Christy also ranks as one of public safety’s foremost early adopters.

Pictured below is the a chart depicting a well-known theory published by Everett M. Rogers called the Diffusion of Innovations adapted for how we expect NG9-1-1 adoption to take place in public safety communications. 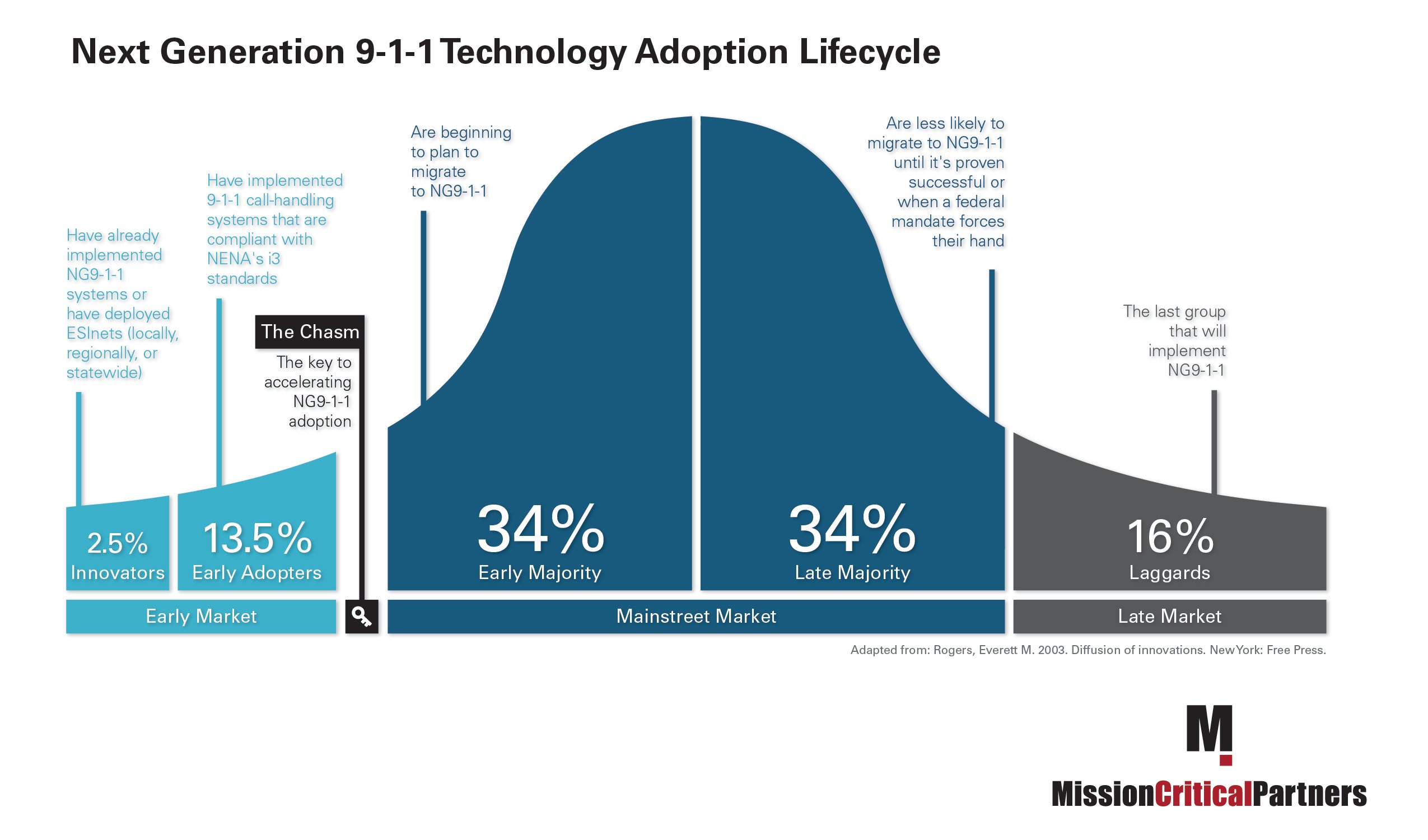 Full disclosure: Lake and Williams are MCP clients, but that is not why I am mentioning them in this blog; rather, it is because they are among a small band of innovators who are trying to lead the community into a very exciting future.)

Both spoke during the Early Adopter Summit about the challenges that early adopters face.

Fear of the Unknown and Fear of Failure

Chief among those are fear of the unknown and fear of failure. Lake updated attendees on his center’s efforts to leverage crowd-sourced data to enhance situational awareness for first responders.

“We are in the development and testing stage of this,” he said. “We are working with our technology partners, we’re writing job descriptions, and we’re actively doing what we need to do to move forward. Among the comments I’ve heard at this summit are, ‘we don’t have the standards, we don’t have the training—we don’t know what we don’t know.’ But until we start taking the first steps, we’re not going to know what we need to implement.”

Something else that Lake is doing is embedding a mental health clinician into his center. The multi-pronged goal is to serve patients better, free up 911 call-takers, and reduce the load on emergency responders by cutting down on hospital transports.

“Most of these calls don’t require an ambulance,” he said. I wonder how many other PSAPs across the country are taking this bold, visionary approach to a challenge that pretty much every 911 center has on some level—my guess is not very many.

The Politics of Early Adopting

Politics also present a sizeable challenge for early adopters. According to Maher Maso, the former mayor of Frisco, Texas, who spoke during the summit, people always want public safety, but they don’t always want technology. He cited the use of unmanned aerial vehicles, aka drones, as an example. Many people are concerned about privacy.

“You can get a 911 call today, push a button, and have a drone over that house in a minute, so that the responding police officers and firefighters can have eyes (on the situation),” Maso said. “That technology exists—but politically we can’t implement it. Will it make our communities safer? Absolutely. … But the laws haven’t caught up yet.”

An equally huge challenge, which is tied to politics, concerns funding. The technology that will bring public safety and emergency response into the future isn’t cheap. “Public safety isn’t as big a deal when it comes to writing the check,” Maso said, speaking of public officials. The key to changing the paradigm is to engage the citizenry early and often, through facility tours, birthday parties at fire stations—whatever it takes.

He added that once the public is engaged, public officials—the holders of the purse strings—tend to become engaged as well. “But it doesn’t happen overnight,” he said.

As I mulled all of this, I began to think of the fear element of early adoption, especially the fear of failure. That led me to think of a scene near the end of the movie The Post, which chronicles the struggle of the New York Times and Washington Post to publish the Pentagon Papers. In this scene, Meryl Streep, portraying Katherine Graham, the Post’s publisher, says, “We don’t always get it right, we’re not always perfect. But I think, if we just keep on it … that’s the job, isn’t it?”

The same thought could be applied to early adoption in the public safety/emergency response community, don’t you think?