911’s History is Gratifying, but its Future is Thrilling

Considering that our planet is about 4.5 billion years old, a 50-year slice doesn’t seem all that significant—until one considers the amazing progress that can be achieved in such a timeframe. Take aviation for instance. On December 17, 1903, at Kitty Hawk, N.C., Orville and Wilbur Wright made the first flight of a powered aircraft; the voyage lasted 12 seconds and covered 120 feet. By the early 1950s, jets were traversing the Atlantic Ocean on a regular basis, and soon after the first non-stop flight to Australia occurred.

It all started with A phone call 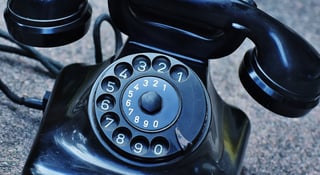 The 911 sector has a similar history. Next week marks the 50th anniversary of the first emergency call made in the United States by dialing the digits 9-1-1. The call was made by Alabama Senator Rankin Fite on February 16, 1968, in Haleyville, Alabama, about a month after AT&T officially designated 911 as the emergency code throughout the U.S.

The initiative to establish such a code began with the National Association of Fire Chiefs, which proposed in 1957 that a dedicated telephone number be identified for the public to report fires. Before 911, the only way to do so was to dial “0” for the operator. That was a big problem in big cities, as a great many people were dialing “0” for all sorts of purposes, with the result being that emergency calls often took quite a while to connect or were inadvertently disconnected.

It took another decade for the movement to pick up steam. In 1967, the President’s Commission on Law Enforcement and Administration of Justice proposed that a single number be established to report all emergencies, not just those related to fire and rescue. AT&T, which was the nation’s monopoly provider of local and long-distance service at the time, chose 911 because it wasn’t being used as an area code, office code or service code, but also because it was thought to be easily remembered and quick to dial—no small consideration when lives are on the line and every second matters.

Establishing 911 as the nationwide emergency calling number was a watershed moment for public safety. In the years that followed, innovations emerged that improved the level of service provided to the public. The ability to locate callers improved dramatically with the advent of automatic number identification (ANI) and automatic location identification (ALI) technology, and later, wireless Phase 1 and Phase 2. The introduction of computer-aided dispatch (CAD) and automatic vehicle location (AVL) systems not only helped dispatchers choose the appropriate emergency response, but also to get it to the incident faster. And text-to-911 service, though still in a nascent stage, is providing equal access to the 911 system to the deaf, deaf-blind, hearing-impaired and speech-impaired communities, in addition to those who might be placed in greater danger if they made a voice emergency call, such as during a home invasion or domestic-abuse situation.

The number of lives that have been saved because of the 911 system is incalculable. To borrow from a certain fast-food chain, it would be wholly appropriate if every 911 center in the U.S. erected a sign outside its facility that reads, “millions saved.”

A look to the future

While these advancements are worth celebrating, they ultimately will pale when compared with what’s coming to the 911 sector. To get a sense of what we mean, let’s revisit the earlier aviation analogy. Shortly after the advent of transoceanic flight, man was launched into space, and a dozen years later, was walking on the moon. A dozen years after that, reusable spacecraft were taking astronauts into orbit and bringing them back. Arguably, the advancements made in the ensuing quarter century were considerably more impressive than those of aviation’s first half century. The advancements that are coming to the 911 sector will be every bit as impressive, and transformative.

The transformation will begin with Next Generation 911 (NG911) and the nationwide public safety broadband network being implemented by the First Responder Network Authority and, ironically, its commercial partner AT&T. Together these networks will enable an unprecedented amount of data—and new types of data—to be shared between telecommunicators in the 911 center and first responders in the field . The result will be enhanced situational awareness that will improve emergency response.

But that’s just the tip of the proverbial iceberg. Social media, crowd-sourcing applications and sensor technologies, once harnessed, will generate an incredible amount of actionable data that not only will take emergency response to new levels, but also will enable public safety to transition from being primarily reactive to, in some cases, being proactive. The idea is that, by leveraging a wide variety of data to predict when and where an emergency might happen, it could be prevented—public safety’s Holy Grail.

So, to sum up the outlook for the 911 industry on this important milestone, much has been accomplished, but our work is far from over. Together, through strategic partnerships and advancements in technology, let’s evolve 911. Over the course of the next six months, Mission Critical Partners will pay homage to where we’ve been, but more importantly, will provide insights into 911’s exciting future.

Over the course of nearly two decades, I’ve written hundreds of thousands of words about the 911 sector—and I’ve never been more excited about its future than I am right now. Stay tuned.

About the Author: Glenn Bischoff is MCP’s technical writer/editor. Prior to joining the firm four years ago, he was editor-in-chief of Urgent Communications for a decade.