What’s the Future of Land Mobile Radio in a FirstNet World? [Webinar]

Nick Falgiatore, an MCP subject-matter expert from the radio and wireless team and a 2017 recipient of the IWCE Young Professional award, investigated a key question on the minds of many public safety officials last month in an Above Ground Level (agl) Magazine article.

The article, “What’s the Future of Land Mobile Radio in a FirstNet World?”, discusses how the nationwide broadband network being implemented by FirstNet will eventually provide mission-critical voice, but predicts that it’s a long way off. As a result, public safety officials should consider not only investing in—but also replacing, when appropriate—their land mobile radio (LMR) system.

Here’s an excerpt from the article on the speculation around whether FirstNet will replace LMR systems:

“Certainly, the suggestion to abandon legacy older LMR systems makes sense on the surface—why burn up previous financial resources on an LMR system that could be obsolete in just a few years? But a deeper dive reveals that the only prudent option for public safety radio agencies is to invest in replacement of legacy radio systems that are reaching end of life.”

You can read the entire article here. We've provided the cliff notes below, and will also discuss this topic in-depth during our upcoming webinar on Tuesday, September 25 at 2 PM ET | 11 AM ET. Register here.

We’ll be discussing this topic in more detail on Tuesday, September 25 at 2:00 PM ET, and we’ll also provide some scenarios for how FirstNet and traditional land mobile radio (LMR) networks may converge in the future. Register now. 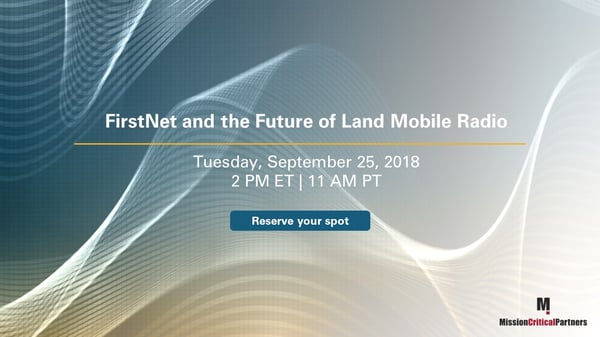 Commercial PTT Technology: What it Means for your Land Mobile Radio Strategy