The ability to broadcast emergency alerts to the public has been in place in one form or another for nearly seven decades. In August 1951, the Control of Electronic Radiation (CONELRAD) system was launched; it leveraged AM radio frequencies to send out alerts. A dozen years later the Emergency Broadcast System (EBS), which utilized television frequencies, was born; its original purpose was to enable the president to speak directly to the American public in times of crisis, such as the “who is going to blink first?” nuclear showdown between the United States and the Soviet Union that occurred a year earlier. 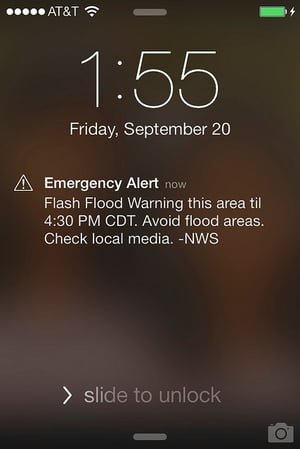 Nearly another quarter century went by before the EBS was improved upon, which occurred when the Federal Communications Commission (FCC), the Federal Emergency Management Agency (FEMA) and the National Weather Service (NWS) collaborated to create its replacement, the Emergency Alert System (EAS). The EAS, which was launched in 1997, originally leveraged commercial radio/television and land mobile radio, and was intended to allow the president to address the public within 10 minutes; it also provided a means of alerting the public to weather events when time is of the essence, such as tornadoes and flash floods. Later, the EAS expanded its reach to cable, digital and satellite radio/television, as well as smartphones.

It should be noted that IPAWS is not an alerting platform; rather, it enables authorized alerting authorities to simultaneously push out alerts to the public via multiple distribution media. It also does not represent the alpha and omega of emergency alerting—for instance, an emergency management agency that is authorized to use IPAWS shouldn’t abandon its other tools like tornado siren system.

But IPAWS is a very important tool in the emergency management toolbox because it speeds getting the message out to the public when a disaster has occurred or, more importantly, before it occurs, which gives people more time to get out of harm’s way—which is critical when a tornado or wildfire is bearing down on them.

Consequently, every alerting authority from coast to coast should be taking steps to become an authorized IPAWS user, if they haven’t done so already.

You can learn more about IPAWS and how it works as part of your alert and notification plan during our July webinar, "Integrating IPAWS Into Your Public Alert & Notification Plan." Space is limited. Register today.