Posted on February 7, 2020 by Darek Wieczorek

I must admit I attended as a skeptic. I have been working with various utility companies in the United States for a while, and I have viewed them mostly from a land mobile radio perspective. At the time of the conference, my view of the utility sector was that it was not very interesting, primarily because the significance of voice communications had been diminishing steadily over the years and its data needs seemed limited.

But the conference turned out to be an eye opener.

The first revelation—what I call my “aha!” moment—came while listening to presentations by a couple of large Midwest utilities. Believe it or not, one utilizes 19 wireless networks for field communications, while the other uses more than 20, including:

If you think about this list for a moment, it should give you a bit of a scare. Think of multiple installations; integration of different types of equipment; user training; technical training; maintenance work; maintenance agreements; systems monitoring; administrative tasks; spare parts, cybersecurity—the list goes on and on.

And this represents just the field-area networks. This diagram (Figure 1)—developed by the National Institute of Standards and Technology (NIST)—depicts the mind-numbing complexity of a typical utility’s communications networks. It should be noted that the diagram does not consider any significant new developments, such as distributed energy resources—e.g., solar panels on residential buildings, microgrids, and electric vehicle charging facilities—which only would add to the complexity. 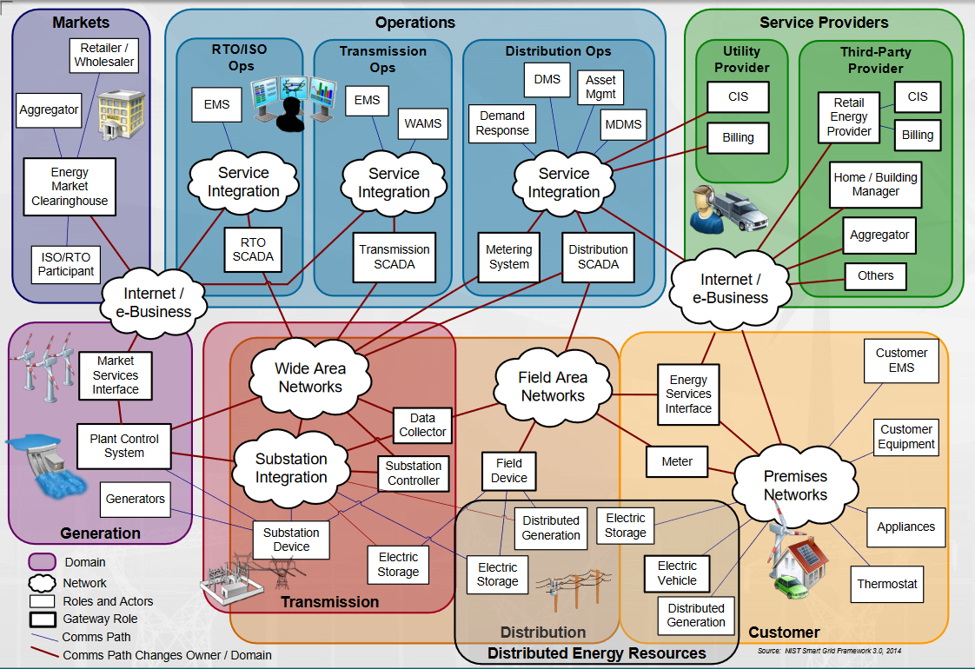 The second revelation was that utilities have a great mistrust of commercial cellular networks, especially during a crisis. This is driven largely by the fact that commercial wireless carriers are not eager to share information about their networks, nor are they interested in guaranteeing their performance. At least two utilities reported during the conference the refusal of various cellular carriers to enter into agreements that would guarantee network performance in the following areas:

What utility in its right mind would rely on these networks to protect multimillion-dollar equipment and facilities, such as power distribution stations?

I recently participated in a project that examined wireless data applications for utilities. It turns out that most of them use very short messages (less than 512 bytes) and the response time is not critical—in many cases five to seven minutes is perfectly acceptable. On the other hand, there are some applications for which latency is extremely critical and the requirements exceed anything that could be provided reliably by an LMR system.  Moreover, I did not think that adequate latency performance could be delivered by Long-Term Evolution (LTE), which was designed for non-mission-critical applications. So that’s not an option either.

But as it turns out, I might have been wrong about that—which I will discuss in a subsequent post.

Darek Wieczorek is an MCP senior technical consultant; he can be emailed at DarekWieczorek@MissionCriticalPartners.com.