In a recent post, I wrote about my experiences at last October’s Utility Broadband Alliance (UBBA) conference, which Southern Company hosted. I had written that Long-Term Evolution (LTE) technology probably doesn’t represent a workable option for a utility’s data communications, largely because it was developed by commercial wireless carriers for non-mission-critical applications. Now I’m thinking that might not be the case, after learning that Southern Company now is a proud owner of the first large, private, utility-owned LTE network in the United States. Southern Linc is the subsidiary responsible for implementation and operation of this private LTE network.

When I spoke with Southern Linc engineers at the conference, they were enthusiastic about the network, and confident that it would deliver on all the company’s current communications needs—particularly voice and low-latency data applications. Similar enthusiasm was expressed by Ameren, another utility that is experimenting with private LTE, albeit on a smaller scale.

An observation gleaned from Southern Company’s presentation during the conference is that, from a utility’s perspective, there is a game-changing difference between public and private LTE networks.

In practice this simply means that the performance parameters to which commercial wireless carriers will not commit—coverage, quality of service, prioritization/preemption, and security—can be guaranteed with a privately owned LTE network. The network can be designed so that, for example, a high-voltage power line damaged by a falling tree can be turned off before the wire hits the ground, potentially saving lives and preventing fires. Figure 2 compares the advantages and disadvantages of public and private LTE networks. 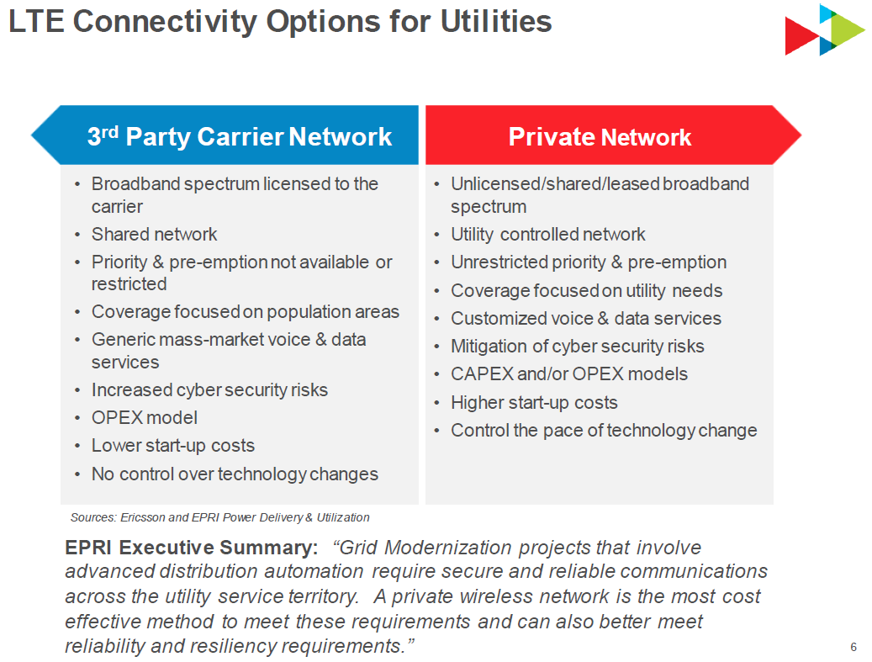 The potential of LTE in the utility sector thus is huge—the technology can solve the great majority, maybe even all, of the sector’s wireless communications needs. However, it is not easy or cheap to implement. For example, implementation of Southern Linc’s private LTE network was a significant challenge, both for the utility and its vendor, Ericsson, despite both companies’ world-class resources dedicated to the project. The great majority of the 3,200 electrical utilities in the U.S. have very limited resources and will not be able to implement private LTE networks without significant external help.

The market opportunity for private LTE in the utilities sector is tremendous. In the first quarter of 2018, Navigant Research published a report on the Neural Grid, a communications ecosystem for the transmission-and-distribution grid that leverages artificial intelligence and sensor-generated data. The following is an excerpt:

Navigant Research’s analysis of the utility market for public and private, wired and wireless communications networking equipment and services, including early LPWA investments, indicates that nearly $86 billion will be spent by utilities through 2025.

LPWA stands for low-power, wide-area wireless technology—which is another way to describe LTE.

Darek Wieczorek is an MCP senior technical consultant; he can be emailed at DarekWieczorek@MissionCriticalPartners.com.